The End of the QFS and its Legacy

The ending of the QFS was anticlimactic, perhaps fittingly so a program started through such simple means. Maintenance of the websites related to the QFS declined progressively over time, with the last update to the pages that proudly displayed the history, mission, and rationale behind the name of the QFS occurring around 2010 and being copy and pasted over until at least 2015, resulting in Dr. Chatterjee being listed as a new addition to the team several years into her term co-organizing the series. Following 2015, the official qfs.appstate.edu website would never again be updated, still displaying that information on the 2015 series would be “coming soon” well into 2021, before the url would eventually be changed into a redirect link to diversity.appstate.edu.

The last recorded run of the QFS was in Spring 2017, where Dr. Kyle Stevens ran a few film showings in the QFS’ traditional location of Library Lecture Hall Room 114 in conjunction with the Gender, Women's, and Sexuality Studies Program run by the Department of Interdisciplinary Studies. After this point, official records on the QFS end. Unofficial accounts fare little better, with ASU’s student organization for the LGBTQ community on campus having no members on staff who could recall the existence of the QFS as of 2022. The QFS, which had previously been an annual program, was dropped from renewal by this point. 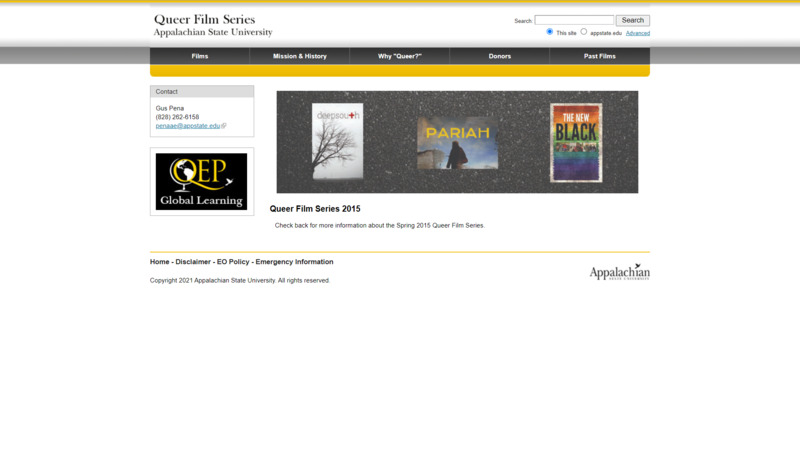 The official qfs.appstate.edu webpage, circa 2021. This webpage can currently only be viewed via the Wayback Machine.