The Mission of the Queer Film Series

The Queer Film Series’ mission has been fairly well preserved from the ravages of time. Websites that remain active, as well as archives of defunct websites, tell us that the mission of the QFS was “to further university goals for diversity by using high-quality LGBTQI-themed cinema to promote understanding and acceptance of the many ways people experience and live out their gender identity and sexuality; highlight the intersections of sex, gender and sexuality with other categories such as race and class; and to provide a venue to discuss, with invited and university experts in the field, the films and the questions they raise about issues such as identity, community, prejudice, normalcy, etc.” There was also emphasis placed on promoting multiculturalism and international perspectives, which manifested in the eventual QFS film lineup through the presentation of foreign films with English subtitles.
Another noteworthy aspect of the QFS that relates to this mission is the use of the word “queer” in the series’ title. There are many options for what an event relating to the LGBTQ+ could be called, and the QFS acknowledged this. The choice of “queer” was chosen, according the official QFS sources, as opposed to “Gay and Lesbian” to be more open and inclusive to other identities under the broader queer umbrella and as opposed to any variation of the LGBTQ acronym to avoid “the unwieldy and ever-expanding “alphabet soup”” of tacking on new letters to the acronym. “Queer” was also seen as a more “radical” term, socially and politically, and the QFS considered their activism inseparable from social politics. From this explanation, it can be understood that the QFS was committed to the inclusion and acceptance of many different identities, even to the extent of associating themselves with “radical” notions of sex, gender, and identity, but were also committed to clarity of communication, and “queer” was the best compromise in language for what the QFS wanted to accomplish. 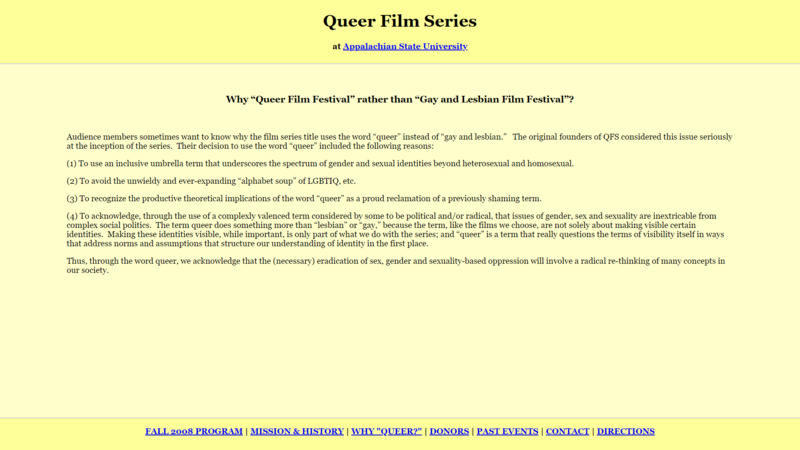