The Origins of the Queer Film Series

The QFS as a project began in 2000 through the combined efforts of Drs. Kim Hall and Sandie Gravett, who were members of Appalachian State University’s Departments of Philosophy and Religion. The original meetings took place in various rooms in ASU’s Student Union, where the attendance was around 50 participants according to the QFS’ website. These film showings were originally meant to coincide with the National Coming Out Day of October 11th of 2000, and the films selected were chosen to correspond with LGBTQ courses being offered by the university that semester.

By the third annual run of the QFS, changes began to occur that would shift the QFS into a form more in line with how it would continue to function for the rest of its existence. Dr. Gravett left the project and Dr. Jill Ehnenn, of ASU’s English Department, took her place as Dr. Hall’s co-organizer. Dr. Ehnenn would go on to be a consistent member of the leadership team for the QFS for the rest of the decade. The location of the film showings would also change, as the QFS would move into ASU’s Greenbriar Theatre from 2002 to 2005. The move to Greenbriar Theatre would be a great boon to the growing QFS, as Greenbriar Theatre allowed an occupancy of around seventy-five individuals. The QFS’ viewer capacity would increase again in 2006, with the move to Library Lecture Hall Room 114, which would remain the primary, but not sole, location for the QFS for the rest of its existence. The Library Lecture Hall location had a capacity of one-hundred-twenty-five, showing the impressive growth of the QFS compared to its very first runs. 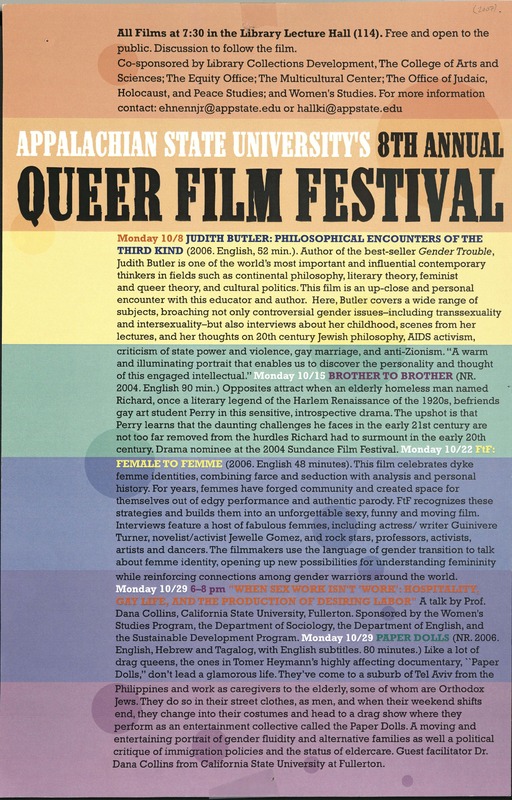 The program above gives a clear example of the varied nature of the content the QFS aimed to provide to students, aligning with the previously stated mission of the series. Additionally, it notes the presence of guest speakers at QFS events who would have offered further dialogue with QFS viewers on queer issues.